An historic four day National Coursing Meeting came to a brilliant conclusion at Powerstown Park, Clonmel today in front of a huge crowd. The winner’s trophies are on their way to Kilkenny, Cork, Galway, Kerry, Laois and Cahir, Co Tipperary this evening but there should be a trophy too for every member of Team Powerstown who produced fantastic hares over the four days. We must remember also our stake sponsors John Boyle (Boylesports), Tom Egan (Horse & Jockey Hotel) and everyone who supported the Classics Club draw.

It has been a hectic few weeks so we will let you all purchase the Examiner tomorrow and the Sporting Press on Thursday for a full report. However it would be remiss of us not to mention the ‘Clonmel 2022 Champions’.

Born in Powerstown Park from a litter bred by racecourse resident Fergus Flynn & his great friend Margaret Flanagan (Barrett). Now a Derby winner for the popular Wilson brothers from Kilkenny,   John and Donal and trainer Kevin Barry. Connections were thrilled when he won Corn Na Feile but today is a dream come true for the ‘Annual’ boys. Qualified at Edenderry and coincidentally that is where 2019 Derby winner ‘Rumour Has It’ trained by Kevin qualified also.

What a day for Kevin Marmion. He bred, owned & trained On My Terms to win the Derby, it represented Loughrea so his own club receives the €1,000 Club Award and for good measure he had the winning ticket in the Classics Club draw on the 2020 whelp Derby. It doesn’t come much better than that and it was great to see his dad Lexie on the podium to accept the trophy.

Ten years to the day that he ran-up the Oaks with Emmas Goldrush, Paul Willis of Mallow made it into the winner’s enclosure with his Borrisoleigh qualifier which he also trains himself. Very appropriate that she should represent that club because she first saw light of day in North Tipperary, bred by Darren Lee (Roscrea) and Ger Maher (Puckane). We had six great finals today but this one was epic with Raven just holding Tactical by the narrowest of margins.

Ballymac Town has produced another Oaks heroine for Liam Dowling and family. Three years ago it was Enya, this time her half sister Floral representing Castleisland. The Dowling family have had amazing success on the track but it was great to see how much they enjoyed this victory and were present in large numbers including a few new additions to the family.

A local success for David Lonergan from Cahir and his parents Bill and Breda. A second success at the 96th National Meeting for trainer Kevin Barry. And many congratulations to breeder Dan O’Donoghue, Millstreet. Came in as reserve but was immediately installed as favourite and a worthy one at that. Huge compensation for having to withdraw Tree Top Henry from the Derby yesterday.

A brave decision to bypass the Oaks (2019 whelps) and opt for the Champion Bitch Stakes instead paid dividends today for owners Ray Conroy & Ollie Dunne of Portlaoise. She truly was invincible and a credit to handler Matt Harte. This lady was bred in Ennis by Bernard Quinn whose family won the very same stake in 2008 with Woodpark Rebel, grandmother of today’s champion.

Our sincere sympathy to Cork Coursing Club (Blarney) on the passing of their esteemed Vice President and former Chairman, Denis Bernard. Our thoughts also with his son John, daughters Catherine & Ellen and extended family members. May he Rest in Peace. 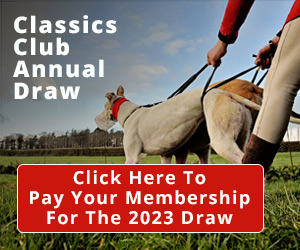