A magnificent rainbow appeared over Powerstown Park this afternoon as the finals of the 93rd National Coursing Meeting were taking place and brought a ‘Crock of Gold’ to the Nolan family of Castleisland & Abbeyfeale, to Brendan Matthews of Newry and joint owner Nora Raleigh, Newcastlewest, to the Field family from Patrickswell, to the Tobin family from a few hundred yards beyond the racecourse, to the Short Puck Syndicate comprising of the Dunphy family Portlaw & their friends Sean Lucey & Kevin Cummins and to the members of the Kimberley & Wymondham Coursing Club Syndicate, Norfolk. It was a tremendous occasion on a most beautiful day and a fitting conclusion to the meeting.

For the second year running Corn Na Feile form proved best in the BoyleSports Derby and Silent Whisper gave an outstanding performance over the three days. The son of New Inn Wonder – Silent Belle has pace, stamina and toughness in abundance. Congratulations to Tom Nolan, his son Marc, father Tim and trainer Mossie O’Connor who possibly arrived in Clonmel expecting to win the Oaks with his sister (beaten in a very exciting quarter-final by Myleene) but leave with the most prized trophy of all in coursing.

Brendan Matthews finally has the full set of Coursing Classics. A multiple winner of Derbies and Irish Cups, the Oaks had eluded him until today. He shares the glory with his good friend Nora Raleigh of Newcastlewest. The brilliant Foxhollow Lady emulates her dam Somelittlething which won the Oaks four years ago and is a daughter of Razor Ashmore which Brendan also trained to win a Derby in 2008. A 25/1 shot before coursing she won more admirers with every round and then saved the best for last.

Twelve months ago Kyle Mozart was involved in an epic final to the Kevin Smith Champion Stakes but came out the wrong side. He more than made amends today with a series of performances from the top drawer, none more so than in the semi-final when he ousted the warm favourite. Marie Field and husband Michael get a great tune always from their third season dogs and this son of Kyle Basil – Lyrics is no exception.

Twelve months ago also the locals were devastated when the Owen McKenna trained Dicks Bimbo went off-line in her Oaks quarter-final. She gave them a similar scare again today in her opening course of the Grace & Matt Bruton Champion but after that made light work of what was billed as a ‘serious’ field of runners. For the Tobin family who were born a stone throw from Powerstown Park it is a dream come true to own this daughter of Kyle James – Barrack Bimbo.

The Dunphy family from Portlaw are better known for their track success with the ‘Droopys’ but they have always been great supporters & sponsors of coursing. They were celebrating this afternoon when Mayfield (Adios Alonso – Gowayoudat) which they own with Sean Lucey & Kevin Cummins won the Stockproof Fencing TA Morris Stakes. Remarkably both Consolation winners had contested the very first course of their respective Classics with Mayfield, trained by Jonathan Best losing to Needham Yippee.

The members of the Kimberley & Wymondham Syndicate had only arrived at Powerstown on Saturday morning when Scaredy Pants (Adios Alonso – Eggemalong) was sent packing by Space Trend. However it was to be a blessing in disguise perhaps as this Neil Herbert trained runner romped through the Dublin Coach Kitty Butler Stakes and gave her delighted connections who travelled in large numbers from Norfolk and other parts of England a weekend to remember.

Much more will be written on this week’s Sporting Press but we will conclude the piece by thanking all those who played their part in the success of the 2018 National Meeting. Most especially our Sponsors and those coursing clubs which got behind DJ, Brian and Team Powerstown and embraced the ethos of a National Meeting. It could not have happened without you and we are very grateful. 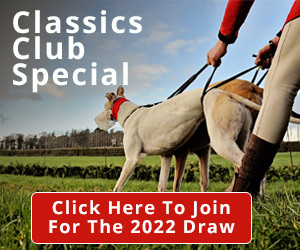